Today I had my 3 month endo appointment. My doctor was not too happy with me.
First strike: Didn't have time to get my blood work done before my appointment. I guess I should have done it while I was at school. I was just so busy that I completely forgot. Hence, we had no A1c to go off of.

Second strike: My morning numbers. After downloading my glucometer's history...she discovered that I have been waking up in the 60s almost every morning. For the next week, I'm going to have to wake up at 1 or 2am and try to figure out if it's my basal rate or my correction that needs to be changed.

On top of everything, I've gained 8 pounds since July. This is mainly because I have not been able to go to the gym as much as I normally do.

I think this appointment has shown me that my health always comes first. I still test 8-10 times a day, but I just haven't been eating as well, exercising as much, or documenting my numbers. I can't perform at my best unless I take care of myself first. Next semester, my goal is to make my health the number one priority. I will only live one life...might as well try and make it as healthy a life as possible!
Posted by Karen at 1:53 PM 2 comments:

Lately I've been thinking about how interesting it would be to live in the 1930s or 40s as a housewife. I just want to see what it's like to live in a simpler time. 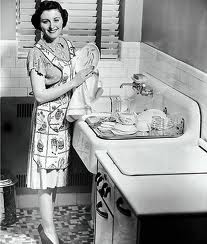 Then, I thought about my diabetes.....how the heck would i manage it back then??? My father grew up in the 1950s and has told me many stories about his aunt. She had type 1 diabetes and the way she managed it sounds absolutely horrific...even in the 1950s and 60s! This made me want to do a little research on managing diabetes in the 1930s and 40s.

According to my research, my doctors would not know that I am a type 1 diabetic because the two types were not distinguished until 1936. Although, I would have insulin! Yay!....BUT I would probably be reusing and boiling needles...OUCH. I would also be able to manage my diabetes, to some extent, through dietary interventions....the dietary exchange system!I was surprised to learn that this has been around for so long.

Today, I test my blood glucose at least ten times a day....in the 1930s and 40s I would not have this privilege. The first glucometer was not introduced for use in a doctor's office until 1970. Accu-Check developed the first self-blood glucose monitor in 1983. This means I would most likely be using "dip and read" tests, monitoring my blood glucose levels through my urine. I currently only do this when my blood glucose has been over 250mg/dL for an extended period of time to test for ketones. I would hate to rely on it for daily monitoring!

One of the reasons I enjoy seeing my endocrinologist every three months is because I get to have my HbA1c tested. This gives me a nice "big picture" of my overall blood glucose for the past three months. If I was a 1930s or 40s housewife...I would not have this opportunity. The HbA1c test was not introduced until 1976.

Overall, I can say.....diabetes was not fun in the 1930s and 40s and I would definitely not enjoy managing it during that period! Thank goodness for science is all I have to say. I am so thankful for my tiny glucometers, my lovely insulin pump, my new continuous glucose monitor, single-use (tiny gauge) syringes.....pretty much every aspect of my current regimen......I AM SO THANKFUL. Of course there's always room for improvement...I would love for a nice artificial pancreas or cure sometime in the future...but until then...thank you to all the researchers who have contributed to the field of diabetes research!! 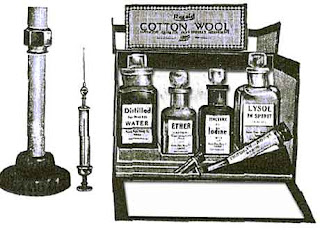 After insulin was introduced for commercial use in the 1920s...this is one of the injection kits that was available. 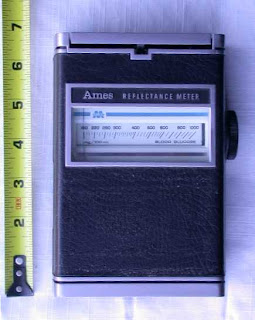 This was the first glucometer developed by Ames....HUGE.

References:
http://www.defeatdiabetes.org/about_diabetes/text.asp?id=Diabetes_Timeline
http://www.diabetesindia.com/diabetes/history_diabetes5.htm
Posted by Karen at 12:59 PM No comments:

This past week, I have had an awful time with controlling my blood sugars....and I'm pretty sure it's all diet related. Actually, I know it is and it's the most frustrating thing ever.

All year, my friends and I have had "Teen Mom Night." I know. It sounds weird. For those of you that don't know, Teen Mom is a show on MTV. They document the struggles of four different Teen Moms. Well, every Tuesday at 10pm, we all get together to watch it. Someone always makes a fantastic snack. Most of these snacks are high fat, high carb....not too good for you. We've had: monkey bread, ice cream sundaes, popcorn loaded with butter and M&Ms, cheesy bread, chocolate chip cookies stuffed with double stuffed oreos.....
This used to be a once-a-week type of thing, which I was completely fine with. I was fine with extreme carb guessing, getting up at 3am to test my blood sugar and correcting. It's not just once a week anymore though. It's now more like 5 out of 7 nights of the week. I've been going to bed high, miss my 3am alarm every night, wake up high....then I'm usually fine for the rest of the day. It's not like my friends are forcing this food down my throat...but how the heck can someone resist eating it?!? It's so good! I think I'm going to have to figure out a way to resist the temptation and go back to indulging once a week. I don't want to lose that great A1c I had back in March! Ughhh! Sometimes I wish I could just eat like everyone else without the pain of carb counting, bolusing, and worrying about whether I covered it all or not.
It's exhausting. I'm overtired. I'm stressed from end-of-the-semester projects.
I just want summer to come......

This is a picture of the best cookie I have ever put into my mouth: an oreo stuffed chocolate chip cookie. 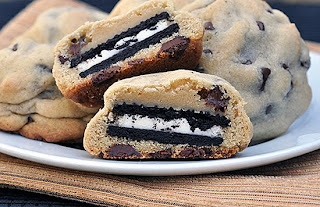